A Common Language for Evidence-Based Programming 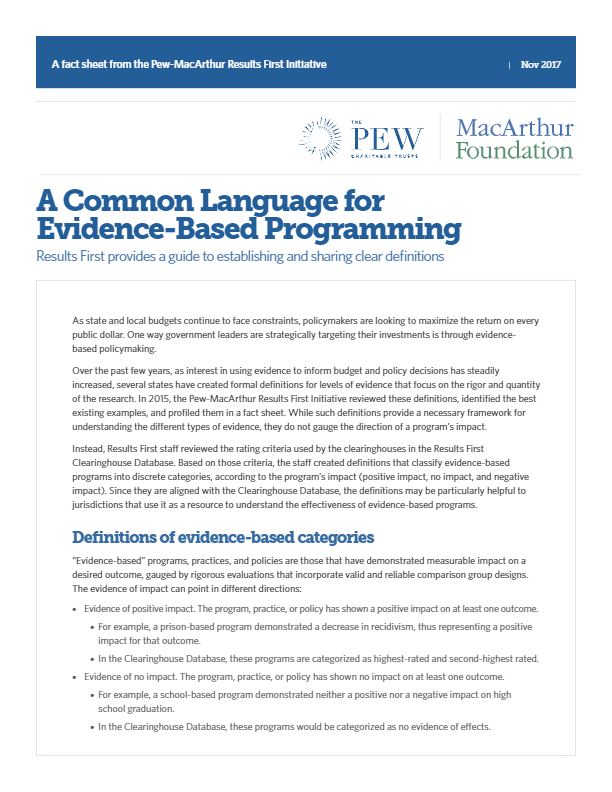 A Common Language for Evidence-Based Programming

As state and local budgets continue to face constraints, policymakers are looking to maximize the return on every public dollar. One way government leaders are strategically targeting their investments is through evidence-based policymaking.

Over the past few years, as interest in using evidence to inform budget and policy decisions has steadily increased, several states have created formal definitions for levels of evidence that focus on the rigor and quantity of the research. In 2015, the Pew-MacArthur Results First Initiative reviewed these definitions, identified the best existing examples, and profiled them in a fact sheet. While such definitions provide a necessary framework for understanding the different types of evidence, they do not gauge the direction of a program’s impact.

Instead, Results First staff reviewed the rating criteria used by the clearinghouses in the Results First Clearinghouse Database. Based on those criteria, the staff created definitions that classify evidence-based programs into discrete categories, according to the program’s impact (positive impact, no impact, and negative impact). Since they are aligned with the Clearinghouse Database, the definitions may be particularly helpful to jurisdictions that use it as a resource to understand the effectiveness of evidence-based programs.

“Evidence-based” programs, practices, and policies are those that have demonstrated measurable impact on a desired outcome, gauged by rigorous evaluations that incorporate valid and reliable comparison group designs. The evidence of impact can point in different directions:

These definitions can provide decision-makers and program providers with a shared understanding of terms, enabling a more robust conversation about evidence-based programming. In turn, this common language can help state and local government leaders identify and invest in programs that are most likely to benefit their constituents.