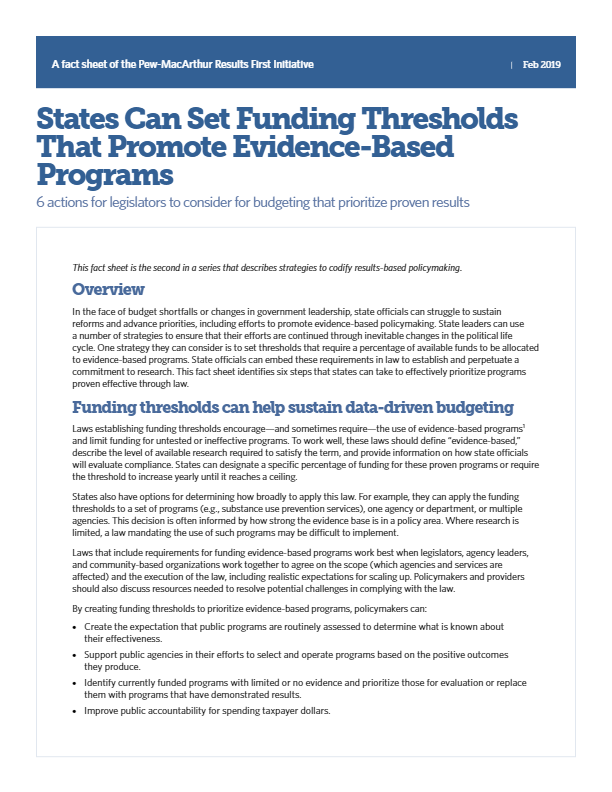 This fact sheet is the second in a series that describes strategies to codify results-based policymaking.

In the face of budget shortfalls or changes in government leadership, state officials can struggle to sustain reforms and advance priorities, including efforts to promote evidence-based policymaking. State leaders can use a number of strategies to ensure that their efforts are continued through inevitable changes in the political life cycle. One strategy they can consider is to set thresholds that require a percentage of available funds to be allocated to evidence-based programs. State officials can embed these requirements in law to establish and perpetuate a commitment to research. This fact sheet identifies six steps that states can take to effectively prioritize programs proven effective through law.

Laws establishing funding thresholds encourage—and sometimes require—the use of evidence-based programs1and limit funding for untested or ineffective programs. To work well, these laws should define “evidence-based,” describe the level of available research required to satisfy the term, and provide information on how state officials will evaluate compliance. States can designate a specific percentage of funding for these proven programs or require the threshold to increase yearly until it reaches a ceiling.

States also have options for determining how broadly to apply this law. For example, they can apply the funding thresholds to a set of programs (e.g., substance use prevention services), one agency or department, or multiple agencies. This decision is often informed by how strong the evidence base is in a policy area. Where research is limited, a law mandating the use of such programs may be difficult to implement.

Laws that include requirements for funding evidence-based programs work best when legislators, agency leaders, and community-based organizations work together to agree on the scope (which agencies and services are affected) and the execution of the law, including realistic expectations for scaling up. Policymakers and providers should also discuss resources needed to resolve potential challenges in complying with the law.

By creating funding thresholds to prioritize evidence-based programs, policymakers can:

How jurisdictions use funding thresholds

Several state governments have passed laws that include funding thresholds to promote and track increased use of evidence-based programs.

Oregon passed a law in 2003 to increase the funding requirement for evidence-based programs to 75 percent in five state agencies: the Department of Corrections, Oregon Youth Authority, State Commission on Children and Families (which became the Oregon Early Learning Division in 2011), the addictions and mental health services unit within the Oregon Health Authority, and the Oregon Criminal Justice Commission.2 The law required that 25 percent of funds be spent on evidence-based programs by 2007, growing to 50 percent by 2009 and 75 percent by 2011, and remaining at that level thereafter.

In its 2016 report to the Legislature, the Oregon Health Authority reported that nearly 80 percent of its programmatic funds went to such programs,3 while the Youth Authority reported spending 87 percent of state funds and 91 percent of its total programming funds on evidence-based work.4 The Youth Authority’s report added that the law had helped the agency “develop capacity and improve programming” while also giving the agency the flexibility it needed to “assess new and promising programs.” It also acknowledged that, while identifying and operating evidence-based programs is a starting point, ongoing assessment can ensure that the law helps to improve program quality and participant outcomes.

In South Carolina, the First Steps to School Readiness initiative was created by law in 1999 as a statewide public-private partnership to improve outcomes for children.5 In 2014, the state mandated that at least 75 percent of funds from First Steps be used on evidence-based programs, which it defined as those that are grounded in published, peer-reviewed research linked to determined outcomes; employ well-trained and competent staff; are linked to other community-based services; operated to fidelity; and are recognized by experts in the field.6

Further, the law required that no more than 25 percent of funding be used for “evidence-informed programs,” which are those that don’t satisfy the criteria of “evidence-based” but that the board of trustees determines to be supported by research indicating their potential effectiveness.7 The law also requires that an independent evaluation be conducted no fewer than every five years on any “prevalent” program (one that receives more than 10 percent of the state’s available funding).

In 2012, the Washington state Legislature passed a bill to significantly increase the use of evidence-based programs in the child behavioral health, child welfare, and juvenile justice systems.8 The law stipulated that each agency attain “substantial increases” in its use of evidence-based programs and submit a report to the Legislature by 2013 detailing strategies, timelines, and costs for achieving this increase. Because of these requirements, the Behavioral Health and Service Integration Administration set a target to increase the use of evidence- and research-based programs by 7.5 percent a year, reaching 45 percent in 2019.9To help providers meet the law’s requirements, the Children’s Administration increased payment rates for providers operating evidence-based programs by 25 percent, in addition to paying for time spent monitoring program fidelity.10

How to create and apply funding thresholds in law

Below are six actions for legislators to consider when determining how best to mandate funding thresholds for evidence-based programs: